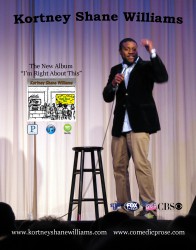 The Next Show is Saturday July 1st at 8pm

Use Code: COMEDY and get a referral discount

And check this website’s homepage.